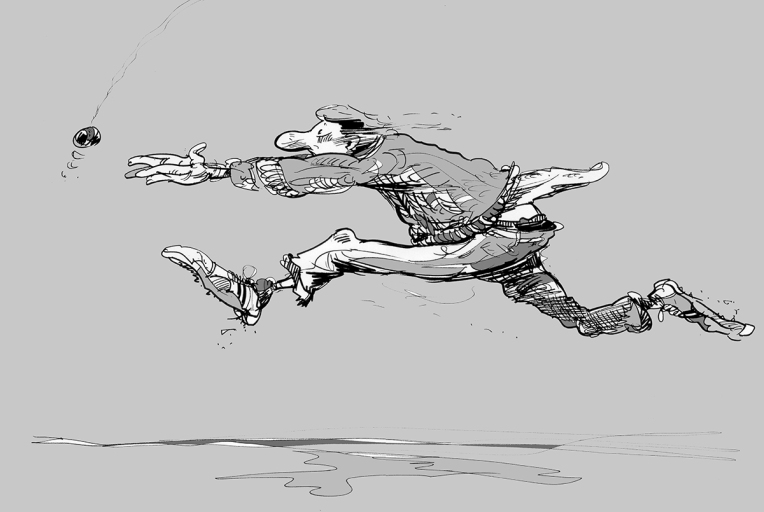 I hope that everyone out there has a very peaceful and Happy New Year. I’m working on a series (yet again) of drawings that are loosely described as ” Sports Nuts”.

Here’s one of the rough versions done between mince pies and acres of pork at Christmas spent with the family up in what’s normally the frozen north but was this time, very mild but very wet and windy.

I got up earlier than most and found it a perfect time to scribble away before the usual late breakfast and the other culinary challenges of the day.

I’m not a big fan of cricket, I’d rather watch paint drying on an old master, hopefully oils rather than the quick drying watercolour. That aside when at school I was given the job as the team scorer, which involved a lot of watching and consulting with the other opposition scorer, wether our maths was up to scratch or not. Mine was generally not, so some retouching was generally required to my scoring book, but as I was generally considered to be quite good at art, this was not a problem. I was roped into the scoring position as my handwriting at the time was considered to be better than average and I agreed to the deal as I was allowed to have a cricket tea with the players. It was there that I got the state for a concoction that was described as Heinz sandwich spread. It’s still available in the shops all these years later, I tried it recently and almost choked on such a dreadful taste. They must have changed the recipe. Please tell me they have.