You’ll need to click on the image for larger view.Wide open spaces.

It’s best to see some previous posts to get the drift here, that might be the snow drift.Thanks for persevering.

I’m keen on signs that don’t quite seem right and here are some I’ve caught up with recently. Hairdressers have a habit of giving their businesses comic signs and this one caught my eye in Victoria, London. For anyone outside the UK, Ryan Air is a local budget airline with a reputation for charging for blowing your nose, so this link does not seem such a good idea.

I’ve been walking past this shop for the last couple of years and perhaps just as well, I’d rather not run into Kim until I know exactly what she nails.

I’ve also got a thing about the overuse of exclamation marks and this sample really does take the biscuit, or the raw fish. This is the local Sushi bar – it’s only food, uncooked.

Then there’s this. For those cyclists amongst you , you can be sure you’ll be safe in Cheltenham. We have designated cycle lanes. This one is about 15 metres long and by the time you’ve got on your bike at one end, it will be the bitter end at the other, so best get off. Stay safe.

If you are in the US then look what we’re giving away in sunny downtown Cheltenham, sound too good to be true? It is. You only get one on the day and you’ve got around 3,000 miles to come to get it, and don’t forget your passport. 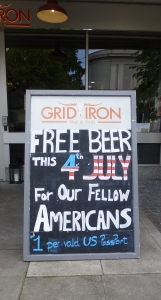 I had a day out yesterday in nearby Gloucester where I was going to a talk given by Tom Denny, who has designed two sets of the wonderful stained glass windows, the first illustrated in detail here is well worth the 3,000 mile trip and a joy for me just 8 miles away. The second is a more recent project celebrating the works of local Gloucester poet Ivor Gurney and is no less stunning than this first project. Mr Denny was erudite and very interesting and it was fascinating to hear how he came to design the windows, his thought process and some details on how the glassmakers create his brilliant drawings and designs into the finished article. The Friends of Gloucester Cathedral organised the event in the Cathedral and I was lucky to get a seat.

I also had a first class seat before the event to watch the parade through Gloucester celebrating armed forces day. Sitting outside The Crow’s Nest, a tiny little salad bar on Westgate Street where you can get probably one of the best salads in the area, and the coffee is also excellent. Gloucester is not a wealthy city, struggling with inner city deprivation, homeless people and at times it shows its bleaker side, but I always enjoy a trip there and the very best thing about it is the friendly people. Don’t pass it by.

The band following troops were lucky to have this player following wearing regulation wooly gloves!

Then back to Cheltenham, friendly Gloucester bus driver, and back into Montpellier, Cheltenham’s poshest area. Unlike Gloucester, Cheltenham is the opposite, with one of the wealthiest town centres, but with some notable exceptions the people are a little aloof. It was the Montpellier Street Fair, and was complete with some vintage cars and here’s an English / United States contrast: the American car was from roughly the same age as the English car, which is an Austin A30.

I’ve always claimed that it was my Aunty Alice who invented the screen wash as she had a little Austin like this and whenever she went out took with her a full squeeze bottle of soapy water, so she could lean out of the driver’s window and spray the windscreen. She told me she’d invented it, who am I to disagree.

So, back home, calling in on the way at a bar for a beer, sadly not free but worth every penny. The young man in front of me elicited no reaction from anyone passing with his green hair, I wonder is he was inspired by a traffic light. Perhaps he changes it every week: Red, Amber, Green. 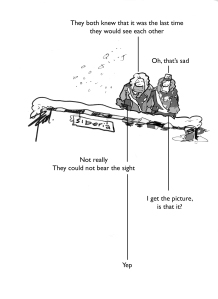 Writer’s block? I went to my writer’s group last week and the plan was they would give us a start and an ending to a story. A sort of crusty piece of bread where we were to put in the jam. That’s where I experienced the ‘jam’. Nothing. The first phrase was : “They both knew it was the last time they would see each other…”. The rest of the group scribbled away and tapped away on their little oeuvres whilst my oevre was completely barren. I sat there like a lemon not knowing how to even complete the sentence, and that’s what it felt like: I’d been sentenced and there was no time off for good behaviour. Today’s guards sort of sum up the evening.

Speaking of no jam in the bread, I’ve added a new profile picture of myself. Taken a good many years ago this is me at a party. I know how to have a good time but here at Susan’s birthday I was not a happy chappie. My dear Aunty and Uncle has supplied catering of the highest standard but they had forgotten the most important addition to a birthday: jam butties. I was not just upset, I was actually very cross, what were they thinking?

Any resemblance to the man on the left in the cartoon is entirely coincidental.

This is a recent posting from Marissa that inspired my last blog.

Glorious Results Of A Misspent Youth

Oh Gina May Melinda Mark
I say it just ain’t healthy
The lengths to which you seem to go
Just to procure a selfie
A long time you did date dear Todd
Was it two years or three?
Until twas time to give that speech
“It isn’t you but me”
The poor man was a wreck that day
He sobbed and he did cry
He left but as you called him back
Great hope did fill his eyes
But disappointment reigned as you
Did bring up from your purse the
Bane of all existence as
You called out “Breakup Selfie!!”

This one’s for Marissa who seems to like almost all my posts, thanks!