This is nothing to do with  French bridge building, but my recent plans to revisit the work of Graham Laidler : Pont

Here’s an example of what he did about the British and below is my own version, but mine is just a rough for the time being. I’m trying to go through as many of his versions as possible and in this instance the drawings have a similar construction, as the subject leaves little to be updated really. Other subjects may well have changed. My exhibition is in August next year so I have plenty of time. Sometimes this is not a good idea as I have a tendency to leave everything to the last minute, and at times produce my better work when under pressure.

Anyhow, today was a simply beautiful sunny day here, bright blue skies and lovely sunshine all day, but cold. It would have been easy to use this good weather to go out for a random walk, but I kept my discipline and got on with the drawing. With Bruce Springsteen at some considerable volume the day has gone well. 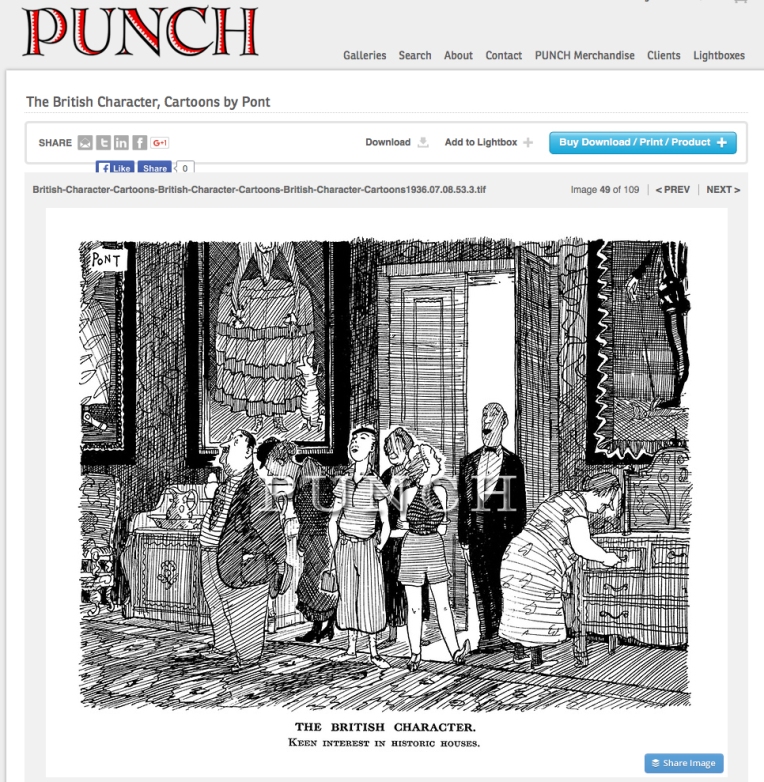 Punch was a very well known magazine in the UK which was a haven for cartoonists and it was always my ambition in the early days to get something published in there. I managed it once when the magazine had a brief revival after going out of publication, and that was my Punch career over as it folded properly. Hopefully nothing to do with my contribution. Pont was popular when it was in it’s heyday, which I missed. However, it does seem to still exist on-line as a repository for a load of cartoons from it’s archives, so it’s still making money from the cartoons. I wonder if the cartoonists or their estates make anything? It would be good to think that they do.

Here’s my own modest take on the one above. 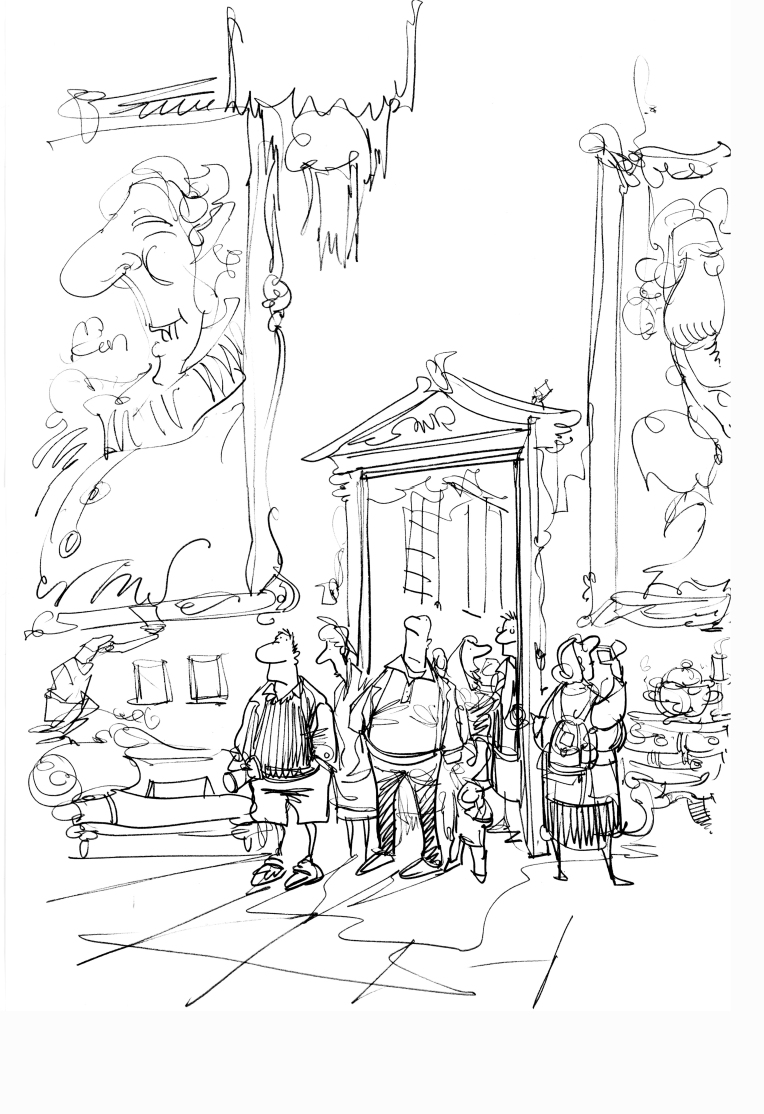 I hope to get that lovely feeling of light and dark into the final drawing. It will have the same title as the Pont  version and an acknowledgement to him too.

More news on my exhibition will be posted as we get closer to the deadline.

So goes the alleged first line of directions to a driver in Ireland. Now I’ve been to Ireland and the only time I got directions was from a taxi driver in Dublin when trying to find my way to a particular street where awaited a bed and breakfast for myself and family. As I got back into the car my other half asked me what he’d suggested.

“I have absolutely no idea what he said to me his accent was so thick, but he did smile a lot giving the impression that the place would be hard to find”

As I drove off and took the next left I could feel that he was watching me having probably told me to take the next right, right?

This was of course well before the invention of sat nav and nothing could give that frisson of excitement as one set off knowing that we’d get lost at least twice on any trip. Even with the benefit of sat nav, which I have but failed to switch on my last trip to Yorkshire. I became overconfident of my sense of direction and managed to circle Sheffield before plunging into the centre to find myself again, making a journey from Holmfirth to Sheffield at least 20 minutes longer than it needed to be.

All this to illustrate what I’ve been working on recently. It’s a continuation of a set of drawing about the British, based on the work of cartoonist “Pont” who was actually someone called Graham Laidler ( The man himself ) and did a series of cartoons about the British in the 1930’s. I’m doing my best to bring this up to date and will be exhibiting the drawings both here and for real at a Gallery in Cheltenham in the Summer. A deadline that I hope I can find. 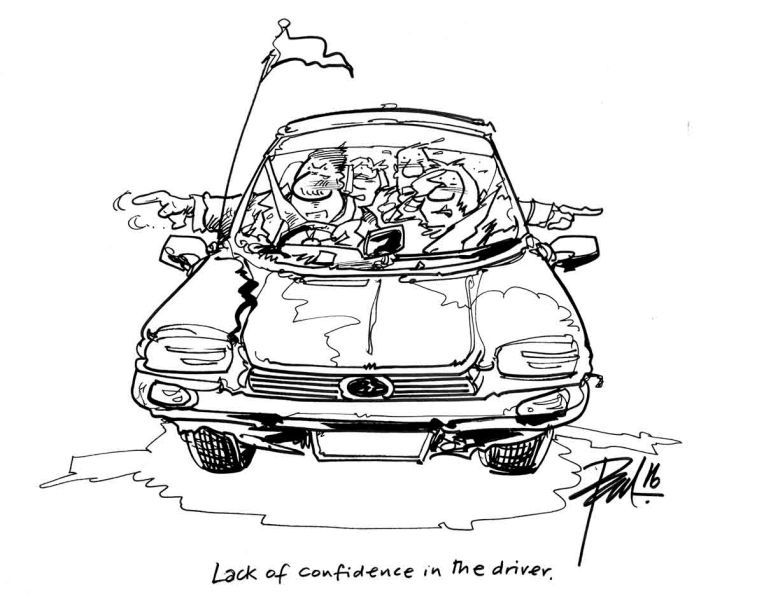 This particular one is perhaps not quite as up to date as I think, as although there is a sat nav in the car, none of them is looking at it and all of them, bar the driver, think they know where they should be going. This is the line work, not the final drawing. I’ll post the final one if it reaches the ‘cut’ with the others later in the year. 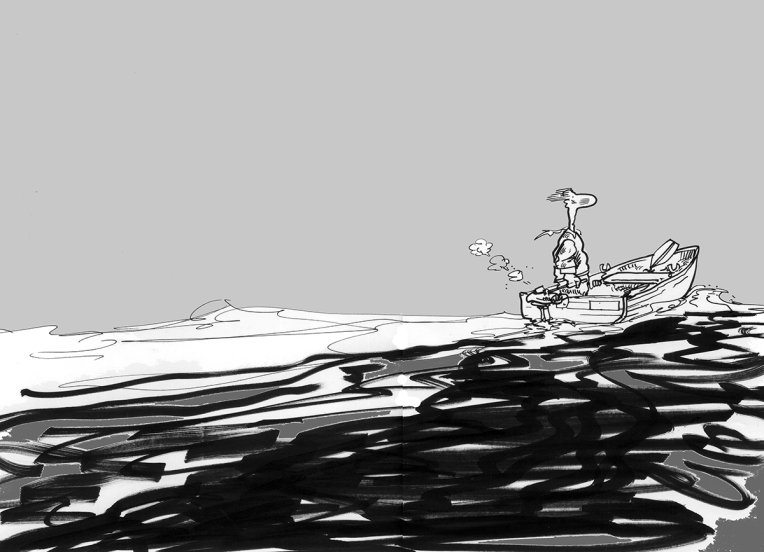 THE BRITISH CHARACTER
An innate ability to look forward with hope

My New Year’s resolution of “do some drawing every day” is being strictly adhered to. I was admonished the other day, good word that, better than being ‘told-off’. The reason was that I’d described my drawing as a rough, when the viewer thought it was finished. Well, in common with many other artists, one has never finished a drawing so they can all be described as rough. This is one such.

My journey for the year is to navigate towards a project about the British and I was inspired to start this by coming across a book about a cartoonist called ‘Pont’. His real name was Graham Laidlaw and he died quite young in 1940. A Punch cartoonist of some repute  he specialised in drawings about the British and their ways of looking at life and living. He’s worth looking up on Wickepedia, his drawings are just lovely.

I’ll be following in his large footsteps and hoping to bring his ideas up to date. Some of them will not need a complete revamp as they are still as true today as they were 60 plus years ago. This drawing is the first to be done and wether or not it makes the final cut will depend on production over the next few months.

I’ll be dropping them into my blogs over the coming months and hope that you enjoy them.