Meandering into the Northgate branch of Gloucester’s Sainsbury some years ago, this friendly supermarket unlike it’s big faceless brother on the other side of town, catered for the city centre folk. Not exactly ‘trolley full big spenders’ but loyal nevertheless.

It was obvious from the quaver in her voice that this was Tracie’s first ‘go’ on the tannoy to announce the deal of the day. She was approaching it with all the trepidation of an ‘x’ factor finalist. Speaking to her mum that morning she said she was a little nervous, more accurately she said ” Oooer Mam am bricking it!” “Oh you’ll be alright our Trace “, her Mum said back reassuring the poor thing by saying ” no one listens to that stuff anyway”.

You could hear her breathing before her first big lines, supplied no doubt by the manager with a sly wink at his colleagues he handed the script to Trace and said, as if the script was perfectly normal: Don’t forget the bit about “Thank you for shopping at Sainsbury”

Going for it big time the announcement commenced, Trace’s voice was perfectly modulated until the last three words of the main script:

and then, with some off mike sounds in the background and barely a whisper ” Thank you for shopping at Sainsbriz”

Leg of Salmon was delivered with just a little lack of confidence. I noticed it and burst out laughing. No one else really took it in, some of Gloucester’s population may well be under the misapprehension that leg of salmon exists, but the manager and script writer were perfectly aware of what they’d done to the script. As he passed me with a broad grin on his face I asked him if he could direct me to the salmon in question. ” It’ll make a change from browsing through the adult cereal ” I told him. ” Did you find anything ‘special’?” he asked me still sniggering.

“Well nothing as special as leg of salmon” I replied. 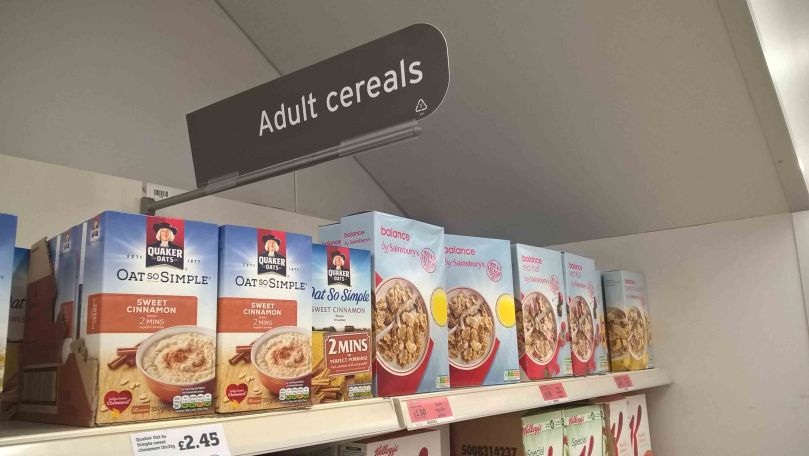 This is a true story, just some names have been changed to protect the innocent.

Here he goes again talking about the price of food. I really do not grumble all the time, honestly. Here’s a gem spotted in my local supermarket in the “no added anything section”. By the looks of it it’s just a bit of courgettes spiralized and blasted, and then put into the regulation ‘no-fun’ packaging.

As someone once said to me about my own work ” Who buys this stuff? ” At the time I was able to say ” quite a few people actually”.

Let’s make one thing clear though, courgettes do not make pasta. They are a watery green vegetable with not a lot of taste. At this rate we’ll all be having radishes for breakfast.

That is £90-00 per kilo you are looking at there, and that’s on special offer.

And I thought they ate croissants. 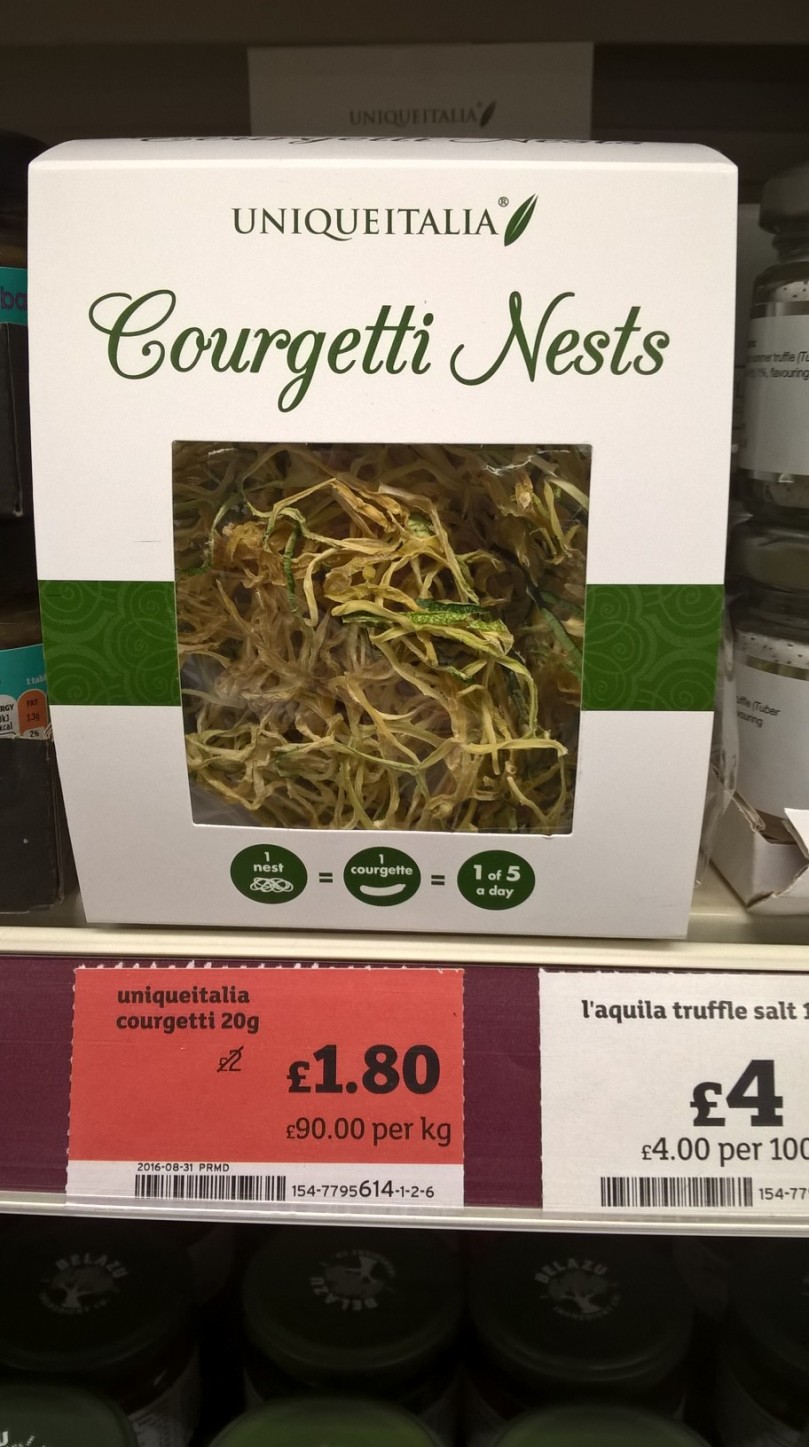 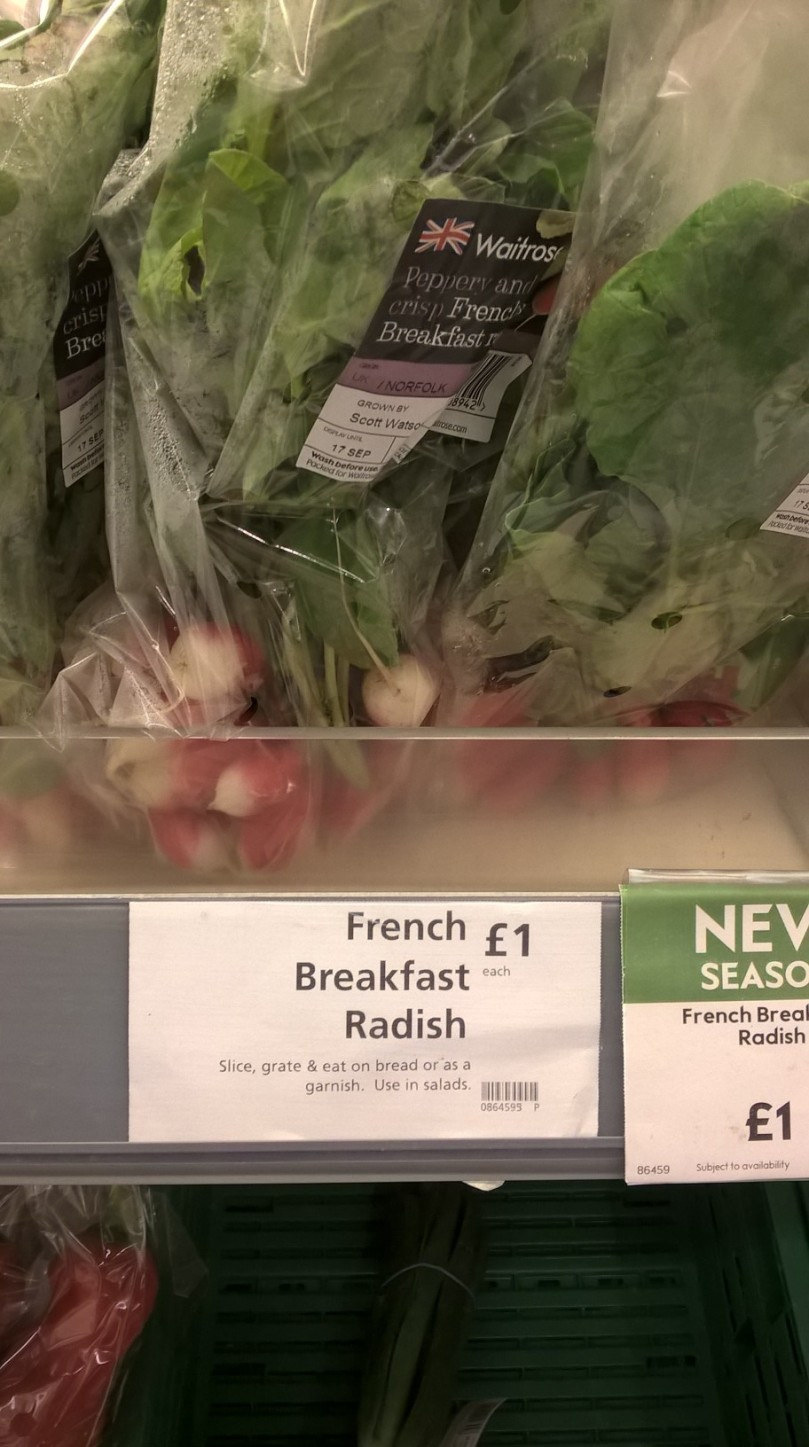 What a load of contradictory messages this sends out. I think I’ll avoid being close to a frenchman straight after breakfast for the time being. Or is this some sort of Brexit conspiracy? These are so-called French radishes grown in the UK. We should be told.