I got into this by accident. I always wanted to be an advertising art director as it sounded glamorous and there might be lots of travel. Photo shoots in glamorous places with glamorous people go with. I had a brief period in the business before I got the order of the golden boot, not fired, just not wanted.I never went anywhere glamorous, but met some lovely people.

The agency that I then worked for: S.H. Bensons was one of those grand old men of advertising where famous novelists started as copywriters and Mr Benson himself was famous for being the original ‘marketing man’ when they had not existed before. He was responsible for marketing Bovril ( that’s a meat extract drink for those not familiar, yes they drank meat extract, had to be better than coca cola ) and made a great success of it in the First World War. He’d long departed this life by the time I was there in the early seventies.

Located in Holborn right across the road from the tube station, the agency boasted a large artwork studio in addition to the many offices with art directors and copywriters. There must have been at least 15 people working in that artwork studio. They also had 2 or 3 full time illustrators working there who had their own room! It was said they could work in any style you required, a Van Gogh type drawing would probably be turned around in a day or so. Full colour Vermeer would take a couple of weeks. One of the illustrators there was responsible for a large imitation of the Bayeux Tapestry for a poster campaign for Guinness, he didn’t weave it, he drew it!

So when I went freelance after they ‘let me go’ I considered myself to be a ‘commercial artist’ and would attempt, like the guys at Bensons, to do almost any style required and was happy to have a go at anything. Apart from airbrush stuff which was beyond me. All that spraying and masking gave you coloured teeth, no matter how careful you were.

When I came into my own, so to speak, doing cartoons, and developing my own cartoon work, much of the other stuff got left behind.

So recently I’ve turned back to experiment with some drawing like I used to. I’m working on a series of ‘silkscreen’ type prints taken from places I know. I’m not a printmaker in the traditional sense, and these are drawn in line first then scanned. Colour added digitally. Actually anyone can add the colour and might be able to do it better than me.

So there’s no punchline here, no joke. Nevertheless I hope it lifts your day.

The image above is one of the valleys coming out of Stroud in Gloucestershire towards Frampton Mansell from Chalford. It’s a magical place. The one below is the simple line work before ‘faffing’ of a view towards Sheffield. 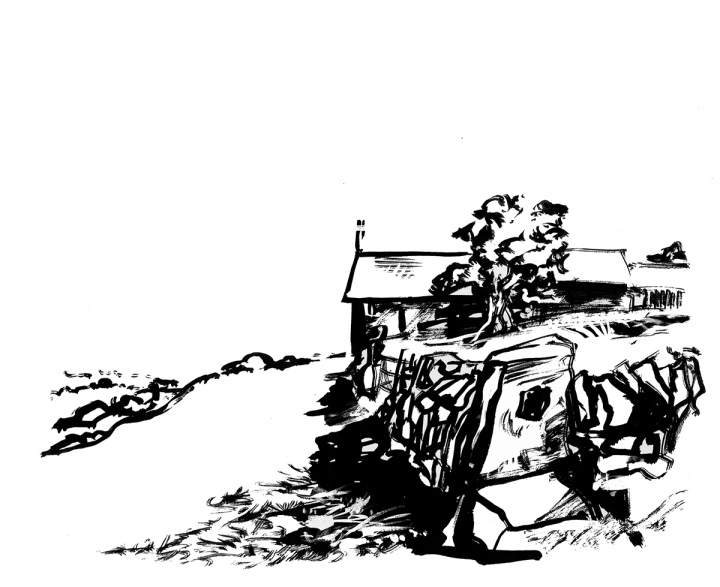