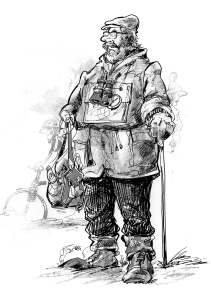 Rambler’s winter and summer coat is tweed, with check shirt, heather mixture stockings and stout boots. The male often has a deerstalker or a flat cap, the female a balaclava which rolls up to make a pom-pom hat. Both carry wooden walking sticks and small canvas rucksacks. You are very unlikely to spot any young.

Once especially common in Snowdonia and the Lake and Peak Districts and frequently sighted in other upland areas, Rambler could also be observed on a serviced campsite but sleeping in an ordinary two-man ridge tent.

Rambler is fast being driven out of habitat by invaders. Particularly ferocious competitors include Extreme Outdoor Leisure Pursuit Persons. They wear helmets designed by the same artist who draws giant ants for Walt Disney, and ride on a bicycle where Rambler was wont to walk. A kind of brightly coloured swimming costume promotes the smooth passage of air around their clearly visible contours. Their bicycles have two hundred gears and yet, curiously, are made to be carried as well as ridden.

Another invader, Healthy Wealthy Wide Boy, can best be described in a true story. Walking down from High Cup Nick in the north Pennines, your correspondent (a slovenly halfbreed sub-variety of Rambler) saw a strange being coming up. This being was wearing a black outfit. It was a type of shell suit made of a very advanced and glistening fibre which must have repelled water, wind, country smells and UV rays while keeping the wearer at a predetermined level of comfort. He also had black boots, a black rucksack, a black baseball cap and a black holster in which was secured his portable telephone. Not black was his aluminium, extensible Alpenstock thing with which, possibly, he meant to sound the depths of any obstructing stream.

Had he been asked the time, he would have revealed a wristlet watch carved from a pound of solid gold, made to resemble the instrument panel of a MIG 29 mounted in a souvenir cog wheel.

His plump son and heir wore an unco-ordinated ensemble of T-shirt, shorts, trainers and red baseball cap. Female consort, plump also, was similarly shirted and shorted but baht ’at. Her shiny white shoes had an ankle strap, a moderate heel and a painted big toe nail sticking out. Dangling on strings around her neck were whistle, compass and a map in a square, clear plastic doodah. What she proposed doing with any of these was not obvious.

In the face of such powerful forces Rambler, gentle and timid (timid, that is, except where blocked rights of way are concerned) can only retreat to the fireside nest, there to semi-hibernate beside a two-foot-high pile of Wainwrights.

Golden words again by Mr Thorburn, and indeed this drawing is a portrait of the man himself in all his Yorkshire glory.If there is any such thing these days…unlikely.

The book of words is now getting increasingly rare, and therefore more expensive.If you must have one then let me know.Would make a great Christmas gift for a grumpy old Yorkshireman.