As some might gather from my previous blog my father died in February after a short illness. He was 93. Some might say it was a good age, and indeed it is, but it’s still a shock when it happens. Some might also say that writing a blog about it is ‘just not on’ as the English say, and I can appreciate that but then I want as many people as possible to know about him.

So I’ve had a short intermission and this will be the only blog about him from now on, so you can click-off from here if you don’t want to know.

Here is his ‘official’ obituary that I wrote:

Tom Davies the former Assistant Chief Constable of the North Wales Police has died aged 93 after a short illness in Gloucestershire where he had made his home after retirement.

Born in Beaumaris, Anglesey he always had ambitions to join the police force. Advised at the time that the best way for him to be accepted was to have a spell in the army with the Welsh Guards, where he could build up his physical strength and learn the discipline, he enlisted aged 17 in 1936.

During the Second World War he saw action with the Guards Armoured Division after D-Day. They fought  through France from Normandy and he was with them as they entered Brussels on its liberation on 3rd September 1944. They continued through Belgium and Holland and suffered considerable casualties in the campaign; it was an experience that left its mark on him for the rest of his life. When he returned to England he joined the Lancashire Constabulary fulfilling his earlier ambition on 1st April 1946.

He rose steadily through the ranks serving in Hoghton where he was a police instructor at Stanley Grange and from there he moved, with his wife Dorothy and two children John and Paul, all over Lancashire. They had spells in Wigan, Bolton, Accrington, Ashton-in-Makerfield and Oldham where he had risen to become a Superintendent and then to Barrow in Furness where he was a Chief Superintendent. He left the Lancashire force 1970, when he was appointed as Assistant Chief Constable for the North Wales Police. He remarked that there was more crime in his previous division in Oldham than in the whole of North Wales at the time. He was particularly proud of his links with  the North Wales Mountain Rescue which came under his jurisdiction at the time. He always regarded himself, quite rightly, as a ‘Proper Copper’.

He was awarded the Queens Police Medal for exemplary police service in 1980.

Well respected, well regarded and popular with those under his command. He has been described as a ‘true gentleman’ by those who served with him and by others who had the privilege to have known him through his retirement years.

He was a keen bird-watcher with his wife Dorothy and a talented photographer.They spent many hours volunteering at Slimbridge Wildlife and Wetlands Trust as well as travelling.

In recent years he battled against blindness and deafness but never let his disabilities get in the way of a remarkable sense of humour and a positive attitude to life and people.

In this image Dad is just 24, he’s marked on the image. This is the Guards Armoured Division outside Cagny in Normandy, thought to be July 1944. Some years ago, before a family holiday to Normandy where I wanted to see where he had been, I bought a book about it and this image was in there. Dad, who’s vision was then reasonable said, that’s me in the picture next to Jim Davies who was killed a day or so later. The man pointing is Syrett who was the officer commanding, he too was killed in action in that area. Jim Davies’ grave is in Normandy and I went to visit it on that trip.

After his experiences in Europe at this time he always said that he felt able to face decisions with some strength, as they were unlikely to be so serious.

I think there was very little that he feared.

What might not come across in this writing is what a gentle man and what a gentleman he was, and what a lot of support and help he had from my mother. Tucked into his uniform in this image, going to fight for us, he carried the small new testament pictured here. The poem from my mother and possibly written by her rather than copied from somewhere else, gives an idea of their bond. We lost her over 10 years ago and I know he missed her deeply, as we will all miss him now. The fern was plucked from the bank of a ditch when he was in peril in Holland, it has stayed in the bible ever since. 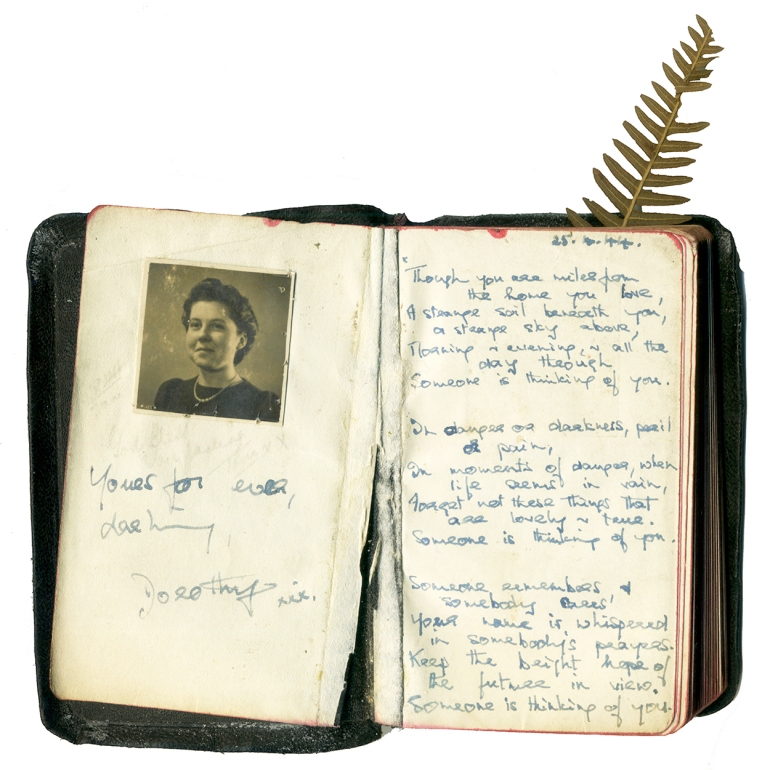 Though you are miles from the home you love,

A strange soil beneath you,

a strange sky above,

Morning and evening, all the day through

In dangers or darkness, peril or pain,

In moments of danger, when life seems in vain,

Forget not those things that are lovely and true.

Someone remembers and somebody cares.

Your name is whispered in somebody’s prayers.

Keep the bright hope of the future in view.

Yours for ever, darling

He never doubted myself or my brother and never told us ever to get ‘a proper job’, when all around us some of our fellow art students were being told exactly that, it was the 60’s when there was a big generation gap.He always kept his sense of humour, even in his final illness where he joked with brilliant nurses and doctors at Gloucester Royal Hospital, despite being struck down with a stroke.

I hope my few words do him justice.