I’ve been to Sheffield, and chose to buy my railway ticket on-line to make it extra efficient.Then 4 days or so before the trip an email tells me that there will be a strike on the day I am traveling: the Sunday. So I go online again to find out exactly what is ‘closed’ and what is not. Journeys further north than England into Scotland looked to be shut. Perhaps the Scots had closed off the border. However, the line from Cheltenham to Sheffield was green for go. There was no mention of money back and my ticket specified that I had to catch a particular train.

Arriving at the station on time it was no surprise to me that the station was busy. It had been a Race Day at the Cheltenham Race Course, so I was expecting ‘stragglers’. There were a  considerable number of Network Rail blokes and Ladies in high viz, and I was advised that “as there is a strike on the train will terminate in Birmingham”,  and I’d have to get another there. They told me it ‘would be fine’, but just in case gave me a form to get my money back if it arrived late.

Arriving at Birmingham I scanned the electronic boards looking for anything that looked like ‘Sheffield’. Nothing. So wandering along I found another phalanx of network rail people, including a small besuited young woman who had the legend ‘Manager’ on her badge. I asked how was I supposed to get to Sheffield as I had been advised by website and station people at Cheltenham that it would be ‘fine’. For the umpteenth time I was advised  that there was a strike on. I lost it. Regaining my composure only when the small manager lady said to one of the very large network railmen to escort me to the bus going to Sheffield.From now on she should be termed Miss Redeemer. Eric the Ready walked with me to make sure I got on the bus. Three more straggling passengers and a small baby boarded and then we set off. Everyone else got off at Derby, whereupon there was just me and the driver on a 55 seater coach all the way to Sheffield, passing through a deserted Chesterfield Station on the way. We had a pleasant chat about the joys of toolmaking, which is what he’s done before becoming a coachdriver. We arrived at Sheffield at midnight. He turned around and drove his empty bus back the Brum. He estimated it would have cost in the region of £700-00 to hire the coach.

I spent some very pleasant time in Sheffield, lovely place. I also took another train trip whilst there to see my old friend Ros, who’s a brilliant printmaker.Rosalind the printmaker We met at David Mellor’s factory in Hathersage which is 15 minutes on the train from Sheffield. David Mellor is well known for cutlery, but did you know that he also designed our modern traffic lights as well as bus shelters? Well, he did and there’s a sample traffic light standing in the restaurant! At first, I just thought they were busy.

They also have a very fancy shop of cutlery and kitchen stuff, and I could not help but take a picture of this. It’s a toastrack and in solid silver. Made for the British Embassies in the 1960’s when the country was near broke. Look at the price today! For almost the same price you could get a 55 seater coach from Birmingham to Sheffield, to yourself.

I’m back home now.
I have sent the form off to claim my fare refund. Out today in the sunshine I could not resist taking this of Edward Wilson, favourite son of Cheltenham, who died on the attempt to reach the pole with Scott. Puts my travel story in the shade a little, but I did study wildlife and the indigenous population of Birmingham New Street Station on the way. 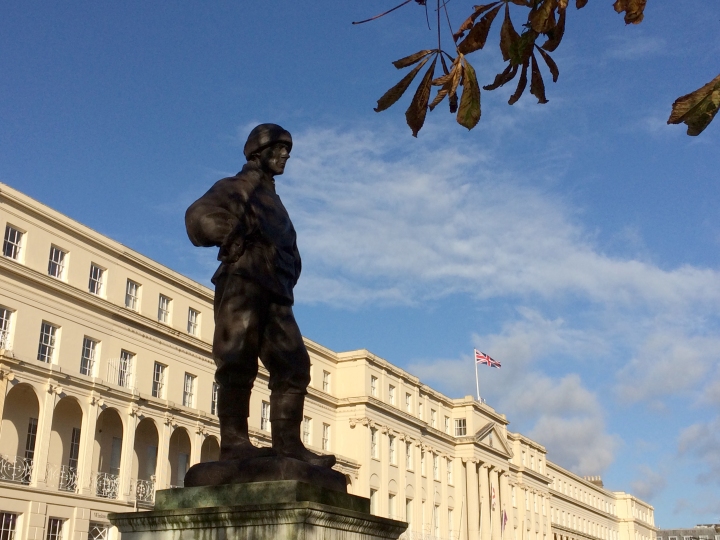