A night out at the Dodger’s Stadium was an education in many ways. The Dodgers were playing the Chicago Cubs. Unlike a football match in England the fans were mixed together and there was no bad language or screaming at the ref. It was an altogether civilised affair. We got there by Uber taxi , which has been a favoured mode of transport. Son in law took me and we armed ourselves with a supper of a hot dog and chips plus what looked like a pint and a half of beer, that we could take to our seats and consume in comfort. The chap next to me was tucking into a pizza the size of a car wheel.

Baseball goes on for a while and is a little like rounders, but with some more sophistication. The pitcher throws the ball at considerable speed, once or twice he hit 100 mph. The batter, who seems to wear very little for protection from this hard ball apart from a helmet, has 3 chances or strikes to hit the ball.There are 9 innings. I’ll say no more than that as this is not intended as a guide to the sport. I’m sure that it is quite complex.

The atmosphere in the place was good natured and enthusiastic. We both loved it. We almost got a baseball souvenir, as any rogue balls that land in the crowd become the property of the person who catches it. One did fall onto the back of Jack’s chair, but as he said afterwards, he was rather too British about it and let someone else have it!

If you ever get the chance to go to Major League Baseball, take it! I hope this small video gives you some idea of what it was like: 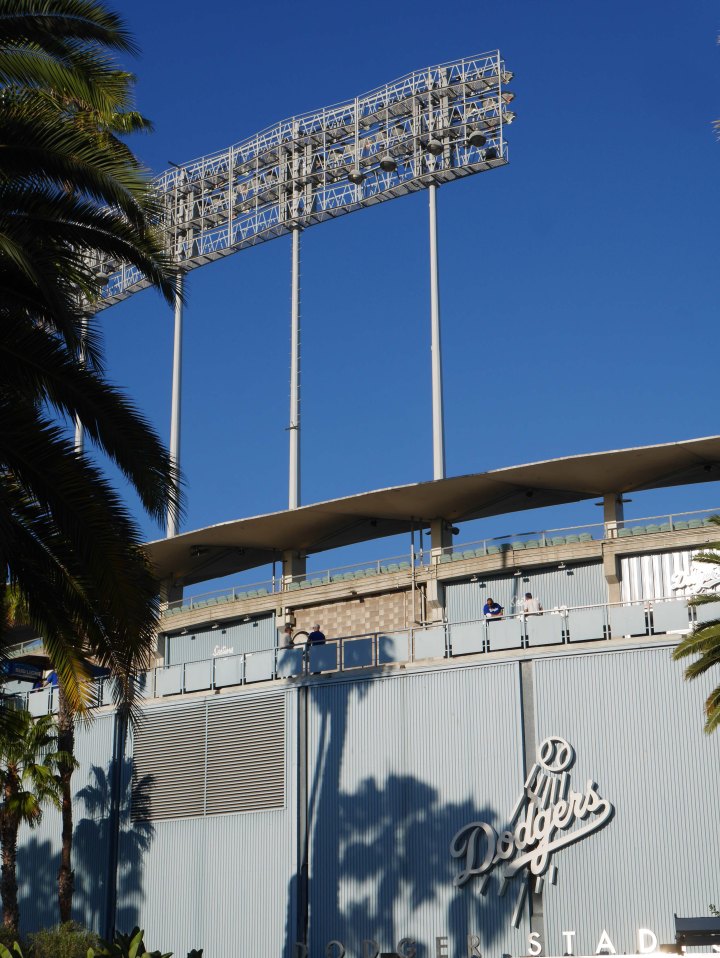 This is the outside of the stadium, one of the oldest in the States, with every modern convenience and retaining a lot of the charm and atmosphere of the place. Inside if you miss the action you can catch up on one of the massive screens, and scoreboards like this. As the evening wore on and the lights came up the place had even more atmosphere. 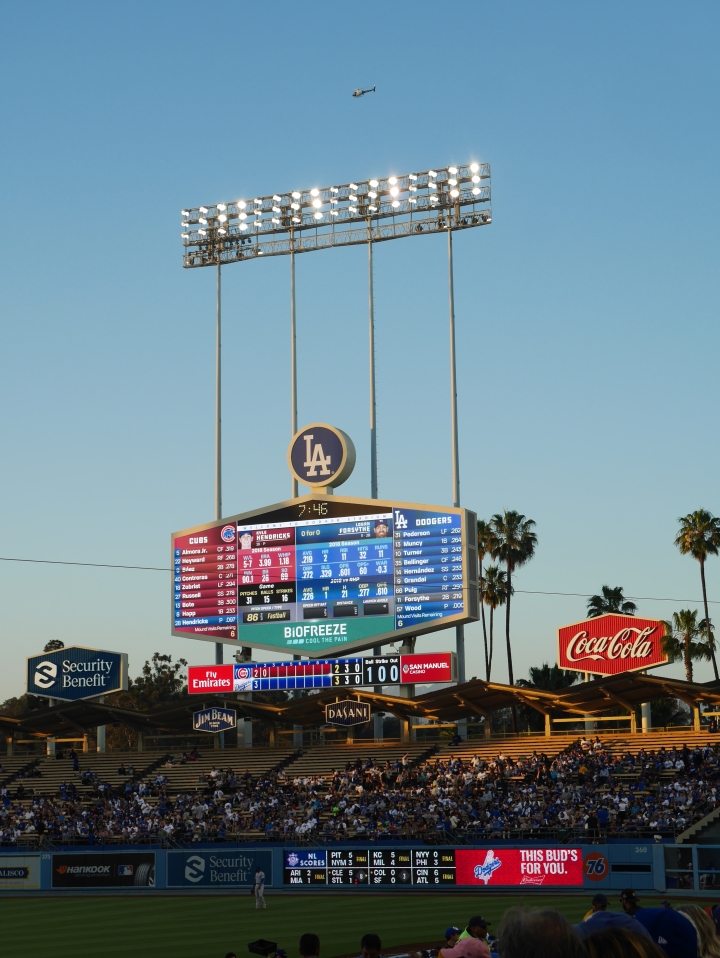 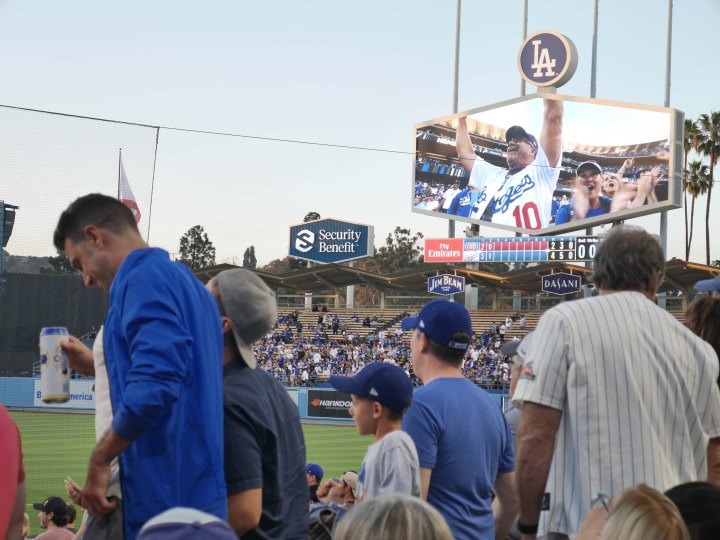 This statue of Jackie Robinson resides just outside the stadium entrance. Unlike many sports statues I thought this excellent, getting the feeling of power and grace of an athlete who was the first the break the racial barrier in the sport. He has an honoured place overlooking downtown LA in the distance. Fid out more about him by clicking the link on his name. 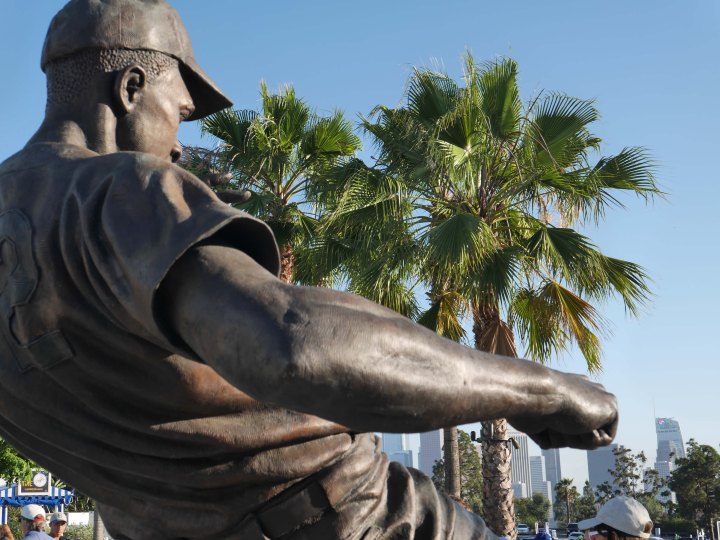 After the match we headed for the Uber taxi rank to find it milling with people so we did the unusual for LA, we walked a little. Getting on to the main road outside the grounds was no problem and when we found a suitable landmark we ordered the Uber taxi. Worked a treat, we just told him to find us under the sign to get us delivered home. A sort of home run. 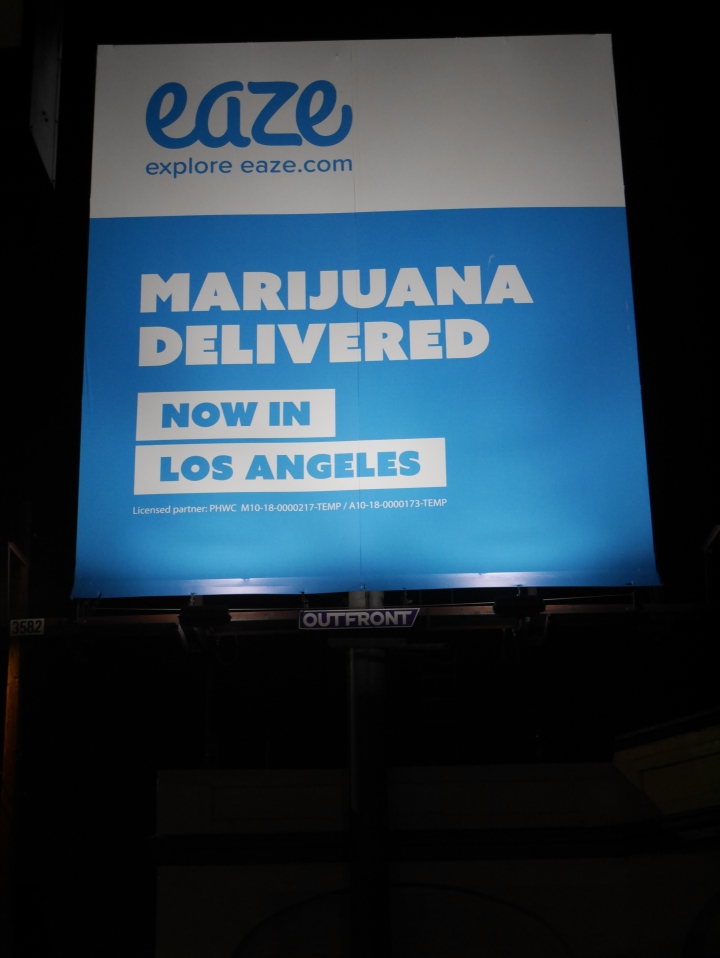 6 thoughts on “LA Dodgers, what a night!”