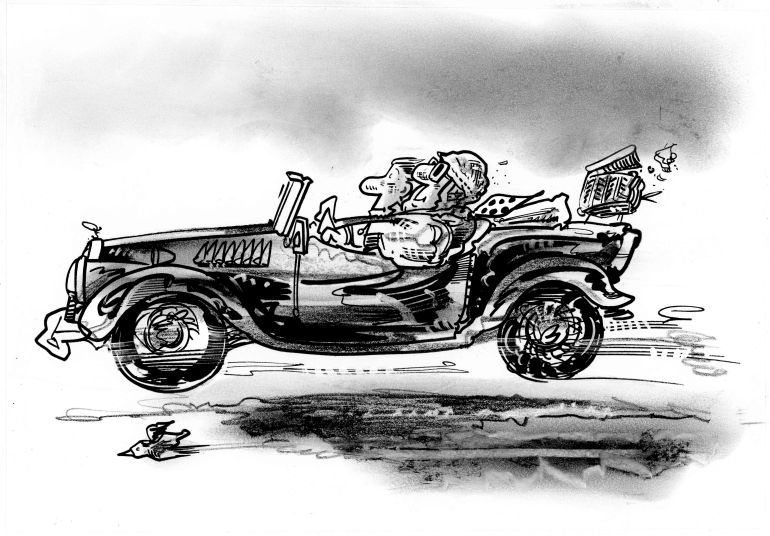 Kings are only human.

As, indeed, are manservants.

After the squash, Macdonald drove King Canoe home through the country lanes in the Royal Sports Car, which was a fantastic old red MG TC. It had the soft top and the wooden steering wheel, leather seats, walnut dash, proper circular dials with chromium round them, and proper black knobs and switches.

Macdonald always had the top down if it wasn’t actually pouring with rain, and King Canoe wore goggles and a leather helmet. While Macdonald drove stylishly but safely from the squash club to Castle Howard, Canoe gripped the pretend steering wheel he had had fitted on the passenger side and made tyre-squealing noises. He also liked to go “Bbbrrrrummm-bbbrrrrummm!”, and jeer at folk with horses and traps or lesser motor vehicles such as the Morris Oxcart or the Ford Peculiar.

When they got back to their summer lodgings they would have a cup of coffee. Macdonald made it, of course, and while he had instant decaf with no milk or sugar, Canoe had to have fresh ground Blue Mountain with double cream and ten lumps. With it, he liked to nibble most of a packet of Jaffa cakes. That done, the King commanded Macdonald to turn on the Royal Answering Machine.

Well, they did get a surprise when they heard Mrs Burblebottom’s message. It was crackly, and partly whispered, but they got the gist all right. An invasion! A battle!

If His Majesty King Canoe of Ang Gonnasec had not been born to be King, but only to be an ordinary Canoe, he would probably have ended up as a school teacher. He would have been that sort of teacher who screams and shouts at you and gets in a terrible state but can never keep proper order. This kind of teacher always ends up being locked inside the art-room cupboard.

When you are King there is nowhere to hide and so Canoe ran up and down his study, flapping his arms and panicking and making squeaking noises.

“If I might make a suggestion, Your Majesty, sire?” drawled Macdonald, who was one heck of a cool dude and had spotted an opportunity.

“Suggestion, Macdonald? Is this the time for suggestions? Don’t you realise, man? We’ve been invaded. There are foreign soils on our soldier. I don’t want suggestions, Macdonald. I want…I want…I want…HEEEEEELLPPPPP!”

Macdonald didn’t know the strength of the Nosepipe army in Scarborough but he knew they were bound to be better than any army led by wobbly, weedy King Canoe.

And so he did what any loyal, Royal manservant would have done in his position. He decided to save himself and ditch the King.